CHICAGO (AP) — Five infants who attend a suburban Chicago day care center have been diagnosed with measles and about 10 more children, including some also too young for vaccinations, could have been exposed to the disease, health officials said Thursday.

The Illinois and Cook County health departments said in a news release that lab tests confirmed measles in two infants who go to the KinderCare Learning Center on East Palatine Road in Palatine. Tests are pending for three others, but they have been diagnosed based on symptoms.

Officials had not identified the source of the infections at the center as of Thursday, but Dr. Terry Mason, chief operating officer for the county's health and hospitals system, told a news conference there is no known link between the infants' measles and a recent outbreak at Disneyland that sickened dozens of people.
The Centers for Disease Control and Prevention says there have been at least 102 confirmed measles cases in 14 states in 2015, not including the Palatine cases. Of those 102, 94 were related to the Disneyland outbreak.
Mason said children who have not been vaccinated — whether infected or exposed — should not return to the Palatine center until Feb. 24 or until they provide proof of vaccination or immunity to measles, which is spread through the air when an infected person coughs or sneezes.
It's so contagious that 90 percent of people who aren't immunized are infected if exposed to the virus, according to the CDC. 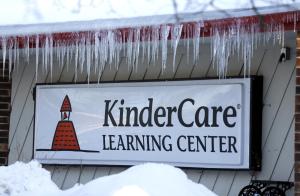 Icicles line the exterior of KinderCare Learning Center on East Palatine Road, Thursday, Feb. 5, 201 …
The Illinois cases come amid growing concern about children who are not vaccinated, including in California where lawmakers are hoping to follow the lead of two other states with proposed legislation that would require parents to vaccinate all schoolchildren unless a child's health is in danger.
Health officials do not recommend measles shots before a child turns 1, at which time the government recommends all children get a first dose of the measles vaccine with a second dose between the ages of 4 and 6.
Illinois law requires one dose of measles vaccine for children in day care by age 2, or proof that they already have had the disease. Two doses are required for those entering kindergarten.
KinderCare spokeswoman Colleen Moran said that while the company, which operates facilities nationwide, follows local health department guidelines and encourages families to consult their doctors about vaccinations, "We realize some don't (have their children vaccinated) for health or religious reasons and we do not exclude kids who haven't been vaccinated."
Moran said the Palatine facility has been thoroughly cleaned and KinderCare officials at multiple centers are going through records to determine which children are and are not vaccinated. 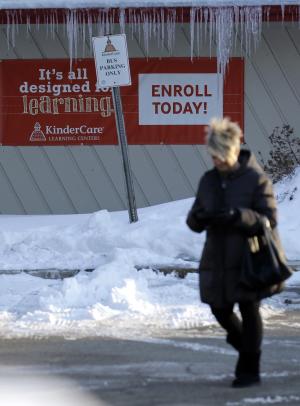 A woman leaves the KinderCare Learning Center on Thursday, Feb. 5, 2015, in Palatine, Ill. Public he …
She said she did not have any information about whether any staff members at the Palatine facility were unvaccinated or had been asked to stay away, or whether any other centers have asked staffers, parents or children who have not been vaccinated to stay home.
The county health department said one of the five children who became ill was hospitalized earlier this week but has since been released. Spokeswoman Amy Poore-Terrell said she did not have any information about their conditions as of Thursday.
For most people, measles is miserable but not life-threatening. The most common symptoms include fever, runny nose, cough, and a rash all over the body. However, a very small fraction of people get much sicker, and can suffer complications like pneumonia and encephalitis.
The CDC's immunization chief said last week that some U.S. measles cases this year were linked with travel to Indonesia, India and Dubai. In recent years, most measles cases in the United States were linked with overseas travel.
___
AP Medical Writers Lindsey Tanner and Mike Stobbe contributed to this report.
Posted by OutFOXedNEWS.com at 8:56 AM