DEFUND OBAMACARE … OR ELSE! (UPDATED)

DEFUND OBAMACARE … OR ELSE! (UPDATED)

Guest post by Rancid Pissant (Reince Priebus)
Stopping Obamacare is the primary mission of the GOP today, but since it’s already law, we must be creative to find ways to keep it from happening. And we don’t have forever– on October 1st people can start buying policies, and in January they’ll have coverage.
So far having the House vote to repeal Obamacare hasn’t had any effect. Whether the first or the 40th time, the law just marches on, indifferent to the hurt feelings of Republicans.
Now at the latest Republican leadership meeting, the main ideas for were threatening a government shutdown or destroying the country’s credit. These are both good ideas, but it turns out the business community isn’t thrilled about them, so I’ve been tasked with finding other options.
So, I ask you, what else should we threaten to get Obama and Senate Democrats to accede to our demands to kill Obamacare?
So far we’ve got:
Please add your suggestions to the comments below, or use the hashtag #DefundObamacareOrElse. Remember, as Ted Cruz says, “This is a fight we can win.”

I asked conservatives on Twitter to use the hashtag #DefundObamacareOrElse to suggest more things for the GOP to threaten, and the loyal faithful came through. If these suggestions don’t put fear in Obama and the Senate Democrats, then nothing will!


Lenny @DimeStoreNinja
#DefundObamacareOrElse Ben Affleck will play every cartoon superhero in every movie.

Robert Crawford @jurassicpork59
#DefundObamacareOrElse we'll bring back the Macarena, kidnap Al Gore and force him to dance to it on national television.

#DefundObamacareorElse ... Mr. Burns will have Smithers release the hounds! 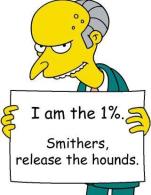