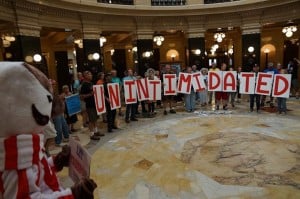 Singers at Monday's Solidarity Sing Along at the Capitol rotunda display the "unintimidated" logo they've appropriated from the title of Gov. Scott Walker's forthcoming book.

Jessica VanEgeren joined The Capital Times in 2008, primarily covering Capitol politics and law enforcement. She previously covered business in the Madison area and state government and politics in South Carolina.

Tuesday is a big day for books with the title "Unintimidated."
Gov. Scott Walker’s book, “Unintimidated: A Governor’s Story and a Nation’s Challenge” will be available for purchase, as will “Unintimidated: Wisconsin Sings Truth to Power.”
The use of the same title and Tuesday release date is not a coincidence, as this story explains. The Solidarity Sing Along has met at the Capitol to protest Walker each weekday from noon to 1 p.m. since March 11, 2011, or more than 700 consecutive days.
The singers figure that they've earned the title, having faithfully continued the sing along in the face of mass arrests over the past few months and numerous citations since Capitol Police Chief David Erwin promised to shut them down a year ago.
Written by Ryan Wherley, the book is a collection of photographs interwoven with the personal essays written by sing-along participants. The book documents how people continued to sing “truth to power” despite the Walker administration changing its access rules earlier this year, requiring groups of four or more, as well as anyone with a visual display, to apply for a permit ahead of time.
The Solidarity Sing Along has long held it has no leader, and therefore cannot apply for a permit. Consequently, more than 600 tickets have been issued to sing-along participants from March 2011 to September 2013.
A majority have been issued since Erwin began cracking down on the singers, with 188 citations issued in July and August. For additional facts on the sing along, click here.
A celebration of the book’s release will take place from 4:30 p.m. to 5:30 p.m., Tuesday, in the Capitol rotunda. Wherley will read excerpts from the book and images from the book will be on display.
A launch party will be held from 6 p.m. to 10 p.m. at the Harmony Bar & Grill, where copies of the book will be sold for $29.
The book will be available Wednesday at local retailers including Anthology, A Room of One’s Own, Rainbow Bookstore Cooperative, Frugal Muse-West, Lakeside Press, Paul’s Books, and The University Book Store’s downtown and Hilldale locations.
Proceeds from the book will support the First Amendment Protection Fund. The fund helps to offset legal costs for people who have been cited and arrested at the Capitol while exercising their 1st and 4th amendment rights.
A sing along-produced CD entitled "This is What Democracy Sounds Like" can be purchased in a digital version by visiting the CDBABY website. To obtain a hard copy, leave a written message at the "Solidarity Sing Along" Facebook page. The CD was produced by Steve Gotcher and Sally de Broux of Madison.

Posted by OutFOXedNEWS.com at 12:28 PM