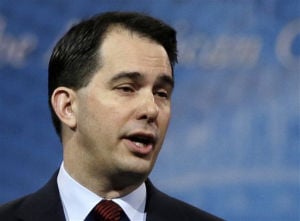 Steven Elbow joined The Capital Times in 1999 and has covered law enforcement in addition to city, county and state government. He has also worked for the Portage Daily Register and has written for the Isthmus weekly newspaper in Madison.

After Lt. Gov. Rebecca Kleefisch, with Revenue Secretary Rick Chandler, launched a series of rountable discussions on tax reform, Gov. Scott Walker, who asked them to conduct the discussions, suggested that maybe the state income tax should be eliminated.
Why was that a surprise? Well, because the discussions were between Republican officials and business leaders. The public and press were not invited. Kleefisch explained to the Beloit Daily News that, "people aren’t as candid when there are cameras and reporters in the room.”
A number of in-state folks have been appalled by the exclusion of the public from discussion on a subject that could profoundly affect their pocketbooks.
For instance, on Dec. 15 the LaCrosse Tribune editorialized: "Closed meetings are simply poor public policy ... while we may not all contribute to political candidates or align ourselves with political parties, we all pay taxes."
But now the exclusion of the public from the discussion has attracted attention from out of state. On Friday, Forbes contributor and tax analyst Cara Griffith took note of the process and had this to say:
“Perhaps Kleefisch didn’t think this all the way through because closing the discussions was a bad decision. First, it sends the message that the administration is willing to let business leaders drive tax reform. While business leaders and trade associations should be vital contributors to a dialogue about tax reform, the discussion should not specifically exclude the public or the press.”
She concludes her column with this:
“[C]losing the meetings sets the precedent that it is acceptable to have meetings behind closed doors and that it’s acceptable to pick and choose who has a voice in the tax reform debate. Walker and his administration should know better.”