John Eisenhower, Military Historian and Son of the President, Dies at 91

John Eisenhower, Military Historian and Son of the President, Dies at 91 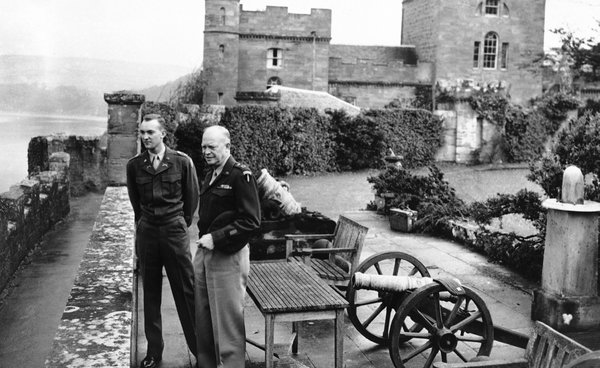 John S. D. Eisenhower, the son of President Dwight D. Eisenhower who forged a reputation in his own right as a military historian, died on Saturday at his home in Trappe, Md., on the Eastern Shore. He was 91. 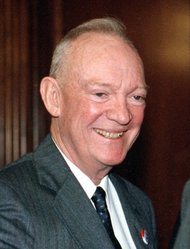 John Eisenhower in 1990.
The death of Mr. Eisenhower, who had been the oldest surviving child of an American president, was announced by his family.
Mr. Eisenhower was an Army officer in World War II and the Korean War and a national security adviser during his father’s presidency, but at that point he was still viewed primarily as the son of Ike, the American hero.
When he graduated from West Point on June 6, 1944, photographers gathered for an image of Mr. Eisenhower, the new second lieutenant, with his mother. But he was seen as a footnote to a historic day: Gen. Dwight D. Eisenhower, the supreme Allied commander, had just announced the D-Day landings on the beaches of Normandy.
Mr. Eisenhower’s public image began to change in 1969 with the publication of his first book, “The Bitter Woods,” a history of the Battle of the Bulge in World War II. It was a best seller, and he later wrote about the Mexican-American War and World War I.
Dwight D. Eisenhower died in March 1969. Two months later, John Eisenhower took up duties as ambassador to Belgium. He was appointed by President Richard M. Nixon, the vice president under Eisenhower and the father-in-law of John Eisenhower’s son, David, who married Julie Nixon.
After two years as an ambassador, John Eisenhower published his memoir, “Strictly Personal.”
“So Far From God: The U.S. War With Mexico, 1846-1848” was his first book with no connection to his father’s career. When it was published in 1989, Mr. Eisenhower, a reserved figure who bore a strong resemblance to his father, reflected on how his life had invariably been defined. “I was patted on the head as the great man’s son,” he told USA Today.
“I said: ‘The hell with it. I’m going to do something my old man couldn’t get into.’ ”
The book was well received, prompting him to remark, “God, it feels great.”
John Sheldon Doud Eisenhower was born in Denver while his father was stationed at an Army post in Panama. As a child, he toured World War I battle sites with his father, who was writing an Army guidebook to them. He attended high school in the Philippines during his father’s tour there and followed his path by entering West Point in July 1941.
When Mr. Eisenhower graduated, Gen. George C. Marshall, the Army chief of staff, directed him to spend his brief leave with his father to help him cope with the tensions arising from the Normandy invasion. Mr. Eisenhower was soon thrilled to be aboard a Flying Fortress bomber, heading over the English Channel to visit the battlefront.
But, as he recalled in his memoir, “I was not only his son; I was a young lieutenant who needed on occasion to be straightened out.”
At one point, he wrote, “I asked him in all earnestness: ‘If we should meet an officer who ranks above me but below you, how do we handle this? Should I salute first and when they return my salute, do you return theirs?’
“Dad’s annoyed reaction was short. ‘John, there isn’t an officer in this theater who doesn’t rank above you and below me.’ ”
Mr. Eisenhower hoped to see combat as an infantry platoon commander, but his father’s fellow commanders, Gen. Omar N. Bradley and Lt. Gen. George S. Patton Jr., feared the impact on his father if he were killed in action or captured. He was assigned to intelligence and administrative duties in England and Germany.
He later earned a master’s degree in English and comparative literature from Columbia University, taught English at West Point and finally experienced combat at the beginning of a yearlong tour in the Korean War.
Just after his father won the Republican presidential nomination in 1952, Mr. Eisenhower discussed his coming deployment to Korea with him. Writing in The New York Times in 2008, he recalled that his father had accepted his decision to seek combat but “had a firm condition: Under no circumstances must I ever be captured.” That, he said, was because his father could have been forced to resign the presidency if the enemy had threatened him with blackmail.
“I agreed to that condition wholeheartedly,” Mr. Eisenhower wrote. “I would take my life before being captured.”
Later, he came to believe that the son of a president or a vice president should not be allowed to serve in combat, in order to free the parent of “worries about an individual soldier, especially a child.”
Mr. Eisenhower was a White House adviser on national security affairs during his father’s second term as president and later worked with him on his presidential memoirs, “Mandate for Change” and “Waging Peace.” He retired from the Army as a lieutenant colonel in 1963 and became a brigadier general in the Reserves.
President Obama said in a statement on Sunday that Mr. Eisenhower had lived “a big and quintessentially American life — one of patriotism and character, learning and teaching, and a deep and abiding sense of service to his country.”
Enlarge This Image

Mr. Eisenhower with his wife, Barbara, and his parents, President Dwight D. Eisenhower and Mamie Eisenhower, on Jan. 21, 1957.
After serving as ambassador to Belgium from 1969 to 1971, Mr. Eisenhower resumed a writing career with his memoir.
He edited “Letters to Mamie” (1978), a collection of his father’s letters home during the war years, to rebut longstanding assertions that his father had had an affair with his Women’s Army Corps chauffeur, Kay Summersby, while he was the supreme Allied commander. Ms. Summersby’s memoir “Past Forgetting: My Love Affair With Dwight D. Eisenhower” had been published in 1977, two years after her death.
Mr. Eisenhower’s “Allies: Pearl Harbor to D-Day” (1982) drew in part on his father’s unpublished manuscript recounting the American-British alliance.
In “Yanks: The Epic Story of the American Army in World War I” (2001), he told of the Army’s emergence as a modern military force. Writing in The Times, Richard Bernstein called Mr. Eisenhower’s description of Western Front battles “complex and gripping” and said, “The overall effect of his sober and careful book is to highlight how much easier it is to create heroic myths than to win battles.”
Mr. Eisenhower reflected on his father’s association with major military and political figures in “General Ike: A Personal Reminiscence” (2003). The Journal of Military History called it “wise in its appraisal of both accomplishments and failures” and “well-researched and beautifully written.”
Stephen E. Ambrose wrote in his biography “Eisenhower” that when John was a child, his father gave him “sharp verbal dressing downs for transgressions, which, given Eisenhower’s standards, were frequent.” But, Mr. Ambrose added, “over all they got along fine,” and later “Eisenhower included his son in as many of his activities as possible.”
In his final years, Mr. Eisenhower joined family members in opposing the design for a proposed memorial to his father near the National Mall, saying it was too extravagant. The project’s fate is uncertain.
In addition to his son, Dwight David Eisenhower II, known as David, Mr. Eisenhower is survived by his wife, Joanne Thompson Eisenhower, who collaborated with him in writing “Yanks”; three daughters, Barbara Anne, Susan and Mary, from his marriage to his first wife, the former Barbara Jean Thompson, which ended in divorce; and eight grandchildren.
John Eisenhower was the second child of Dwight and Mamie Doud Eisenhower. Their first son, Doud Dwight, died at age 3 from scarlet fever.
In his memoir in 1974, when he was only beginning to earn a reputation as an author, Mr. Eisenhower told how he had briefly taken up flying, a hobby that, he wrote, “remains extremely important in my recollections.”
“Almost everything else I have done during my adult years has been affected to some extent by my name — by my father’s position, if you will,” he wrote. “But in the air I had no name; to the Federal Aviation Agency I was simply Comanche Nine-Nine POP. The quality of my landings, navigation and judgment were mine alone.”

This article has been revised to reflect the following correction:
Correction: December 22, 2013
An earlier version of this article misstated the given name of the first son of Dwight and Mamie Doud Eisenhower. He was Doud Dwight, not Doud David.
Posted by OutFOXedNEWS.com at 10:06 AM