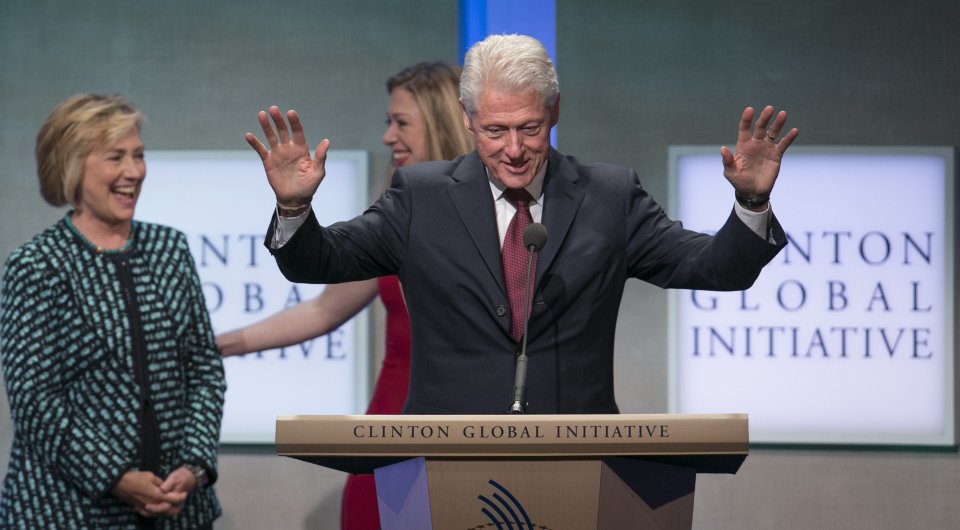 In an interview with CNN's Piers Morgan that aired on Wednesday night, the former president was asked whether his wife or daughter would be better in the White House.

"Day after tomorrow, my wife because she's had more experience," Clinton said. "Over the long run, Chelsea. She knows more than we do about everything.

"There was a time in her childhood when I thought maybe she thought she did when she didn't, now it's highly embarrassing because she in fact does," he continued. "So, I feel like I'm going to school every day when we have a conversation."

The 33-year-old former first daughter has taken a larger role in the Clinton Global Initiative, which is holding its annual meeting in New York this week.

Last week during an appearance on "The Daily Show," Chelsea Clinton told Jon Stewart she's purposely avoided politics "for this point in my life," but left the door open for a possible future following in her parents' political footsteps.

And during a recent tour of Rwanda with the foundation, Chelsea was asked about her political ambitions. Her response:


I’m ... grateful to live in a city and a state and a country where I really believe in my elected officials, and their ethos and their competencies. Someday, if either of those weren’t true and I thought I could make more of a difference in the public sector, or if I didn’t like how my city or state or country were being run, I’d have to ask and answer that question.


Meanwhile, Bill Clinton insists he doesn't know whether Hillary will run for president.

"I don't," Clinton told CNN's Fareed Zakaria on Sunday. "Somebody may know, but I don't. I'm not one of the people who does."

But he can understand the appeal of Hillary on the top of a 2016 ticket.

"She served well as secretary of state, and because people across the political spectrum finally got to see her the way those of us who know her see her," Clinton said. "It was the first time the country had ever gotten to see her as somebody who just, what you see is what you get. She shows up for work every day, gets stuff done and is very strong about it."Forget Hillary. Bill Clinton thinks Chelsea would make a better president — at least in the long run.
Posted by OutFOXedNEWS.com at 10:01 AM