My deep, dark secret: A childhood trauma left me with fear of intimacy 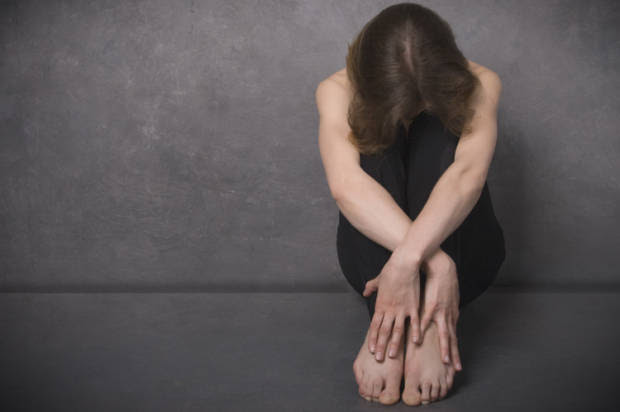 (Credit: Nadezhda Bolotina via Shutterstock)
At the time of my mother’s ovarian cancer diagnosis when she was 65, she wanted to be a grandmother. I just wanted to be normal.
I was 36 years old and I’d never had a lover, a fact I was ashamed to admit and had only divulged to my therapist.
Although I’d wanted to be in a relationship, my attempts to date brought on a total body fight-or-flight response. I played out idealized romantic scenarios in my mind, but when it came to actually being with a man, I felt like somebody’s prey. At the same time, I was terrified of being abandoned.
When I noticed a potential boyfriend looking at me with interest, I was convinced he’d pass me over once he saw through my superficial appearance: with my clothes on, I believed, I was false advertising. I imagined that once he saw me naked he’d view me in a light of lesser worth, because of what had happened to me, because of what I’d been involved in when I was a child.
As a girl, I’d been sexually abused, manipulated into acts that entailed the same body parts and motions as intercourse, but that was rape, my therapist said, that wasn’t the same thing as having sex: I was a virgin.
But I didn’t consider myself to be a virgin. I considered myself to be an anomaly.

* * *
“You could meet someone in the next year or two,” my mother, who frequently lamented that her life was “miserable” because she didn’t have grandchildren as other women her age did, encouraged me. She was positive: “You could have a baby by the time you’re 40.”
I don’t know if she knew I wasn’t having sex.
The truth was, despite my fears, I wanted to have sex. I desired to share myself with a partner and to ultimately create a life together with him. I wanted to have a baby within a committed relationship, within a psychologically and financially stable home. I didn’t want to replicate the family circumstances of my childhood but wanted to make sure I was emotionally healthy before raising a family, because I understood the consequences if I, as a mother, was not.
I knew that not all women in stable, committed relationships chose to have children. I also knew that many were not physically capable. As a teenager, I’d been to doctors for menstrual irregularities caused by the abuse: my body shut down in response to the emotional stress and I was told I might not ever be able to conceive on my own. But in my early 30s, after I was diagnosed with post-traumatic stress disorder and began to process my past, my cycles regulated.

I was able-bodied.
At 36, I despised my biological clock and the women’s magazines that pointed out, with unrelenting persistence, that time was running out, if it was not already too late. Colleagues and acquaintances suggested that if I ever wanted to have a child I should become a single mother, a “choice mom.” I shouldn’t wait, they said like an alarm, I had to do it right now.
But I was in no position to have a baby. I didn’t have job security. I could barely make ends meet on my college instructor salary. I used any cash surplus to pay for my PTSD treatment. I was in therapy three days a week to cope with debilitating anxiety and depression. To me, there was no choice.
“I’m not going to have a child,” I said, “just to have a child.”

* * *
The closest I’d come to having sex was at 33, with a man I was dating named Rob. We met on eHarmony.
Rob was a 35-year-old clinical social worker, tall and lean with thinning dark hair and glasses. Although I told him my parents had gotten divorced when I was 18, I withheld the fact that I’d been sexually abused. I didn’t reveal that I’d never made love.
I wanted to be normal.
One evening, as we cuddled on my couch, my ear was to Rob’s chest and I could hear his heart beating and the vibration of his voice speaking, and I remembered how I used to do that with the man who had molested me. Rob nuzzled his face against mine, and brushed aside my hair with his hand. I knew what he wanted, and I looked up at him invitingly.
We started kissing, touching. Everything was silent, except for Rob’s breathing, which was heavy and deep, and I knew he was becoming more and more turned on, and then the terror from my past overtook me and I could no longer push away the scene in the back of my mind: I was a girl and this was a man I trusted – I do but I don’t want to be your girlfriend – I was pulled in by a sexual arousal that possessed me, toxically, I was crossing that point of no return where love becomes tainted and ugly and so do you because it becomes a part of you, this thing that is being forced onto you, into you, what he is doing and what you are doing to you, that causes the destruction of you, everything within you, between you two.
I nudged Rob off me with a nervous smile. To my relief, and disappointment, he didn’t ask questions. He went home.
Two days later, on a park bench, I told him the truth.
“When I was growing up,” I stated it as simply and as briefly as I could, “I was sexually abused.” I told him I wasn’t ready to have sex with him yet. I wanted to, I said, but I needed him to be patient. “I’m working very hard in therapy to heal,” I explained, “but I need more time.”
Rob’s lips parted as if to say something, but then no words came. He sat silently for a short while, looking down at the ground before he finally stood and walked away. Later that night, he sent an email. He wanted to be able to say the right thing, he wrote, but he couldn’t.
He ended it: “I’m not up for being the partner of a survivor.”

* * *
A few days after the removal of her quarter- and dime-size tumors, along with her ovaries, fallopian tubes, uterus, two lymph nodes, and part of her omentum, my mother revealed to me that her doctors had tested her for the BRCA1 and BRCA2 gene mutations. She was positive for BRCA1. We now knew that from the day of her birth, my mother’s lifetime risk of developing cancer was high: her chances of developing breast cancer were 87 percent versus the general public’s 7 percent, and 44-66 percent for ovarian cancer versus the general public’s 2 percent.
There was a 50 percent chance I’d inherited the mutation. At the recommendation of my gynecologist, I got tested. If I were positive, management would include ovarian ultrasound, the cancer-marker CA-125 test every six months, annual mammogram, yearly breast MRI, a clinical exam twice a year, prophylactic mastectomy, chemoprevention and ovarian removal “after you have your children,” the genetic counselor, a 20-something brunette, told me, “between the ages of 35 and 40.”
Still single, I heard, like a death announcement, that I might’ve missed my window. As an adult, I’d never let a man touch or see my bare breasts. I thought to myself, if I was marked by a genetic mutation, I might not ever have a baby. I might not ever be what I thought it meant to be “normal” as a woman.
What I couldn’t bear to face was the way I felt as if my intimate parts had already been taken.
“They call it the silent killer,” the genetic counselor said, her eyes leaving mine for the surface of her large diamond engagement ring, and then to the oval table, where she placed a large pink slip of paper on which my family tree was neatly printed. With her red pen, she circled names and traced the cancer line: my mother, her sister, my grandfather, his sister and mother. Next to my name, she drew a question mark.
Finally, my blood was drawn.

* * *
A little over a week later, I found out I was negative. Elation washed over me: I felt I’d been given a second chance to live. I was lucky.
I began to face my unresolved fears about intimacy, working in therapy to move beyond my past, sorting out the difference between what had happened to me as a girl and what I, as an adult, had a birthright to have: consensual sex.
After my mother died, I stopped allowing fear to get in my way. I started dating more regularly. I began to feel more comfortable about the idea of sharing the truth of my years of sexual isolation, and I told a couple of friends, as well as my coed therapy group. A straight male member responded by saying, “I think it’s understandable.” Another said, “Why are you so hard on yourself? It’s not your fault.”
Initially, I thought maybe they were just being nice. I hadn’t considered such reactions to be possible.
The truth is, everyone has issues they bring to relationships, but we are greater, more whole, than our shame. We are all survivors of something. We have the power to decide whether our past defines us, serves us.
I still grieve the years and experiences I lost, the men I never got to know, the biological children I will probably never have. There are times I’m aware my past is at play and obstructing my view. That’s a normal, human struggle. But I’ve finally found the freedom to invite intimacy and love into my life, to make a choice to have sex or not, based on my desire and self-respect.
For the first time, I feel like a woman.


A Pushcart Prize-nominated writer, Tracy Strauss has published memoir in The Southampton Review, The Briar Cliff Review, South Loop Review, Beyond the Margins, and other publications. She is currently writing a memoir, "Notes on Proper Usage," about her relationship with her late writer-editor mother, the discovery of her mother's secret collection of documents and personal journals, the abusive man who marked both their lives, and her journey towards forgiveness and reconciliation. Tracy's website is http://tracystrauss.com/. You can also follow her on Twitter @TracyLStrauss. More Tracy Strauss.

Posted by OutFOXedNEWS.com at 7:19 AM