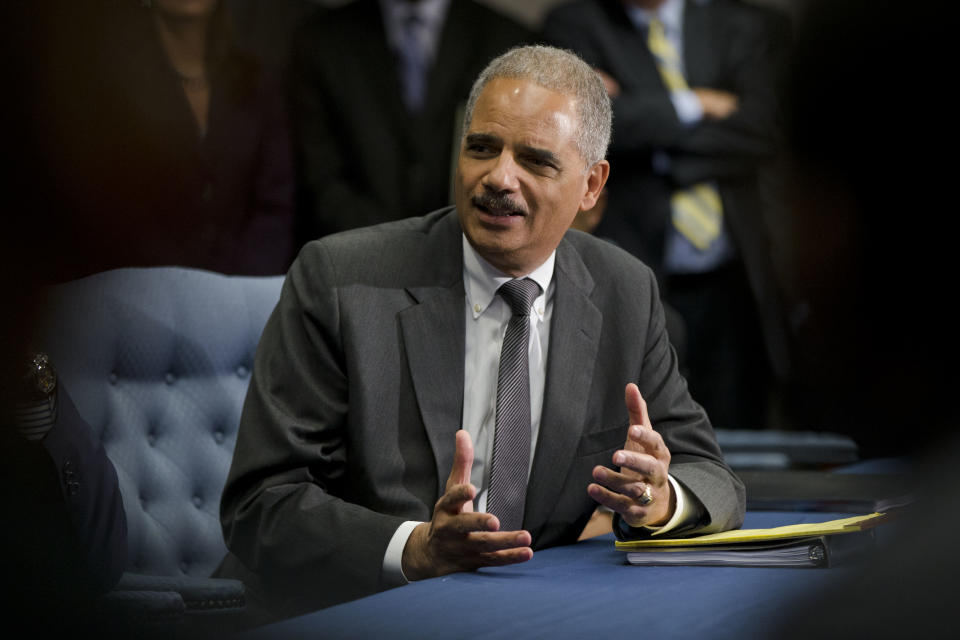 WASHINGTON (Reuters) - Republicans in the House of Representatives plan to introduce articles of impeachment against Attorney General Eric Holder on Thursday, in the hopes of removing a cabinet member they say has lied to Congress as well as failed to uphold federal law.
"This was not a decision that I made lightly. Since the House voted in 2012 to hold Attorney General Eric Holder in contempt, the pattern of disregard for the rule of law and refusal to be forthright has only continued," Texas Representative Pete Olson, who drafted the articles, said in a statement provided to Reuters on Wednesday.
"The American people deserve answers and accountability. If the attorney general refuses to provide answers, then Congress must take action."
The Justice Department did not respond to requests for comment on the possibility of an impeachment move.
The resolution could pass the Republican-dominated House but would likely sputter in the Democratic-dominated Senate, which would have to hold a trial to remove Holder, who has been attorney general since 2009, from office.
Still, an impeachment drive would further fuel the tensions that exist between the federal government's top law enforcement officer and conservative lawmakers. According to the media firm CQ Roll Call, 10 other Republicans would co-sponsor the articles of impeachment, five of whom are from Texas.
According to an outline, the first article is based on "Operation Fast and Furious" a bungled attempt to build cases against major gun traffickers who supplied firearms to Mexican drug cartels, while electing not to immediately prosecute low-level traffickers even as they bought 2,000 potentially illegal guns.
The operation came to light after two of those firearms were found in Arizona at the scene of the fatal shooting of U.S. Border Patrol agent Brian Terry.
After Holder refused to give a congressional committee subpoenaed documents about the Justice Department's involvement in "Fast and Furious" he was found in contempt of Congress. The House oversight committee has also sued for the documents.
The other impeachment articles rest on issues that have raised conservatives' ire in recent years, including Holder's decisions not to enforce laws on same-sex marriage, on prison sentences for certain drug crimes and not to prosecute an official in the Internal Revenue Service for targeting conservative political activists.
They also say Holder lied to Congress about a Justice Department investigation into Fox News correspondent James Rosen.
(Reporting By Lisa Lambert; Editing by Paul Simao)
Posted by OutFOXedNEWS.com at 10:28 AM