By CHARLES BABINGTON 6 hours ago 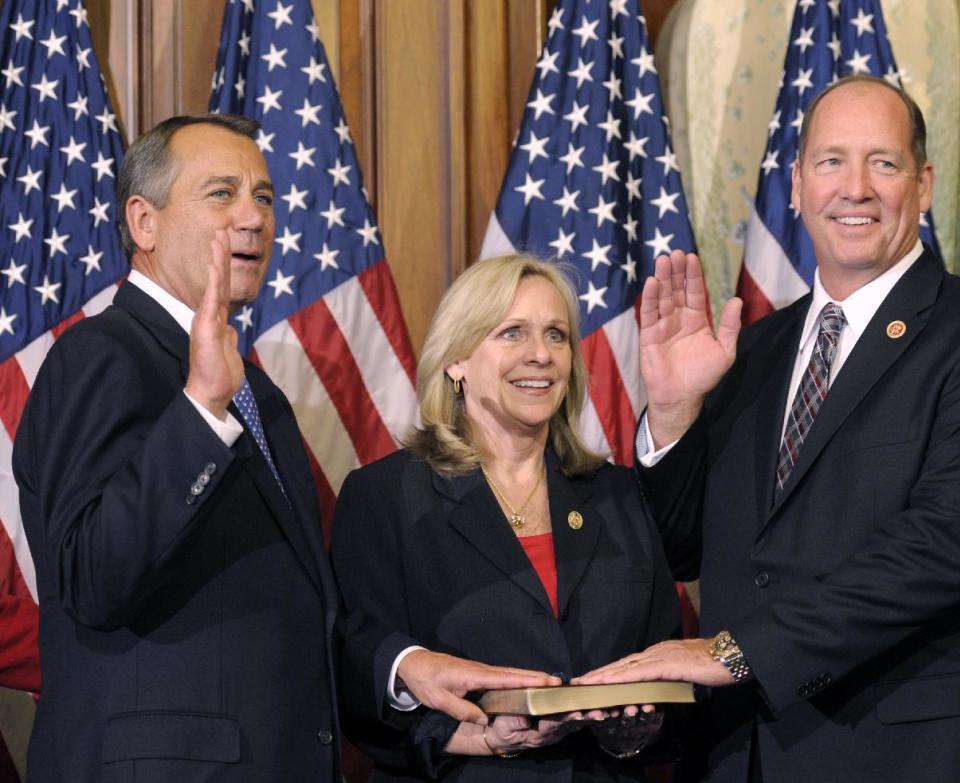 WASHINGTON (AP) — As a Republican, freshman Rep. Ted Yoho of Florida cares about the Republican Party's image and fate. But what he especially cares about is a tiny sliver of the GOP: about 22,000 primary voters who lean heavily conservative and who secured his spot in the House.
Yoho is hardly alone. Many other House Republicans owe their elections to similarly small and ideologically intense electorates. These GOP lawmakers pay far less attention to the party's national reputation. And that deeply frustrates activists trying to build broad, national coalitions to elect a Republican as president in 2016 and beyond.
Yoho and his fellow tea party-backed House members essentially say, "Not my problem."
"I ran on what I stood up to do," Yoho said after defying party leaders and voting against a bipartisan measure to raise the debt ceiling and end last month's government shutdown. "And I got elected on that," he said.
Yoho and many colleagues were elected by a conservative subset of a conservative subset of a conservative subset. It helps explain why they often stick to hard-right positions their party leaders oppose, and why they shrug off polls showing the overall Republican Party's approval ratings plummeted during the shutdown episode.
First, the Republican-controlled Florida government redrew Yoho's district — after the 2010 census and national House reapportionment — to be safely conservative for any GOP nominee.
In last year's primary, Yoho won with 21,717 votes, edging 12-term incumbent Cliff Stearns. That's about one-ten thousandth of all U.S. adults. And it's roughly one-six thousandth of the Americans who voted in the last presidential election.
Once Yoho ousted Stearns, the general election was never in doubt. He won with 65 percent of the vote.
The story is similar in many House districts, where the Republican primary is the only election that really matters. And all primaries — Republican and Democratic — tend to draw comparatively small numbers of voters who are more ideological than the overall electorate.
Finally, Yoho — like any House candidate in a safely drawn district — needed only a plurality of those primary voters. In Yoho's case, he won 34 percent of the total, or 21,717 votes to Stearns' 20,960. Two other candidates shared the rest.
Most House members win larger numbers of votes in primaries, and they often are unchallenged. But even the biggest primary totals are small fractions of the 121 million Americans who voted in all 435 House races last year.
In 2010, the first big tea party-influenced election, three conservative South Carolina Republicans won primary runoffs that catapulted them to the House. Their runoff vote totals ranged from 37,353 to 54,412. Once they secured the GOP nomination, none of these candidates took less than 62 percent in the November general election against Democrats.
When a Republican House candidate needs only 22,000 to 54,000 votes — cast in a conservative-dominated primary — perhaps it's small wonder that he or she worries less about the national party's image. It also helps explain why 60 percent of House Republicans joined Yoho in voting against the bill that reopened the government and raised the debt ceiling.
Republican consultant John Feehery has little patience for House Republicans who ignore national surveys showing that the debt-and-shutdown issue badly hurt the GOP's reputation.
Most of those lawmakers, Feehery said, "represent the 27 percent of the country who approve of how Republicans have handled the shutdown." The others, he said, "simply don't care about polls."
Texas-based Republican consultant Matt Mackowiak said of GOP House members: "Sure, they care about the party. But they were elected by their constituents."
And in that regard, many House Republicans appear on solid footing.
When most House Republicans refused to open the government or raise the debt ceiling unless President Barack Obama's health law was defunded, "we would get nothing but 'attaboys' from my constituents," said Rep. John Fleming, R-La.
"The national media predicated that Republicans would be hit hard and would be blamed," Fleming said, and that indeed happened. But most House Republicans, he said, listen to "our actual constituents. And they were all saying, 'Look, to us this is a terrible law, and you do anything you can to slow it down.'"
Another Louisiana Republican, Rep. Steve Scalise, noted that his party thrived in an Oct. 19 special congressional election, at the height of the debt-and-shutdown debate. Two Republicans will hold a runoff after claiming the top two spots in the state's 14-candidate, all-parties primary to replace retired Rep. Rodney Alexander.
"The conventional wisdom in Washington is that Republicans are going to get all the blame and pay a price at the polls," Scalise said. "Well, in the first election since the shutdown, a Democrat didn't even make the runoff. It shows that people are looking at each race individually."
That's also how most House members view the U.S. political map.
___

Posted by OutFOXedNEWS.com at 8:17 AM