Americans learned in the IRS political targeting scandal that government enforcement power can be used to stifle political speech. Something similar may be unfolding in Wisconsin, where a special prosecutor is targeting conservative groups that participated in the battle over Governor Scott Walker's union reforms.
In recent weeks, special prosecutor Francis Schmitz has hit dozens of conservative groups with subpoenas demanding documents related to the 2011 and 2012 campaigns to recall Governor Walker and state legislative leaders.
Copies of two subpoenas we've seen demand "all memoranda, email . . . correspondence, and communications" both internally and between the subpoena target and some 29 conservative groups, including Wisconsin and national nonprofits, political vendors and party committees. The groups include the League of American Voters, Wisconsin Family Action, Wisconsin Manufacturers & Commerce, Americans for Prosperity—Wisconsin, American Crossroads, the Republican Governors Association, Friends of Scott Walker and the Republican Party of Wisconsin.
Enlarge Image 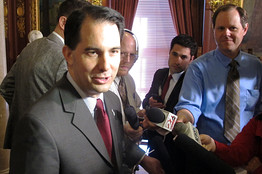 Wisconsin Gov. Scott Walker Associated Press
One subpoena also demands "all records of income received, including fundraising information and the identity of persons contributing to the corporation." In other words, tell us who your donors are.

The probe began in the office of Milwaukee County Assistant District Attorney Bruce Landgraf, though no one will publicly claim credit for appointing Mr. Schmitz, the special prosecutor. The investigation is taking place under Wisconsin's John Doe law, which bars a subpoena's targets from disclosing its contents to anyone but his attorneys. John Doe probes work much like a grand jury, allowing prosecutors to issue subpoenas and conduct searches, while the gag orders leave the targets facing the resources of the state with no way to publicly defend themselves.
That makes it hard to confirm any details. But one target who did confirm receiving a subpoena is Eric O'Keefe, who realizes the personal risk but wants the public to know what is going on. Mr. O'Keefe is director of the Wisconsin Club for Growth, which advocates lower taxes, limited government and other conservative priorities. He has worked in political and policy circles for three decades, including stints as national director of the Libertarian Party in 1980 and a director of the Cato Institute, and he helped to found the Center for Competitive Politics, which focuses on protecting political speech.
Mr. O'Keefe says he received his subpoena in early October. He adds that at least three of the targets had their homes raided at dawn, with law-enforcement officers turning over belongings to seize computers and files.
Mr. O'Keefe and other sources say they don't know the genesis of the probe, and Mr. Schmitz declined comment. The first public reference appeared in an October 21 blog post by Daniel Bice of the Milwaukee Journal Sentinel. Mr. Bice is well known for his Democratic sources.
The kitchen-sink subpoenas deserve skepticism considering their subject and targets. The disclosure of conservative political donors has become a preoccupation of the political left across the country. In the heat of the fight over Governor Walker's reforms, unions urged boycotts of Walker contributors and DemocraticUnderground.com published a list of Walker donors for boycotting.
The subpoena demand for the names of donors to nonprofit groups that aren't legally required to disclose them is especially troubling. Readers may recall that the Cincinnati office of the IRS sent the tax-exempt applications of several conservative groups to the ProPublica news website in 2012.
The subpoenas don't spell out a specific allegation, but the demands suggest the government may be pursuing a theory of illegal campaign coordination by independent groups during the recall elections. If prosecutors are pursuing a theory that independent conservative groups coordinated with candidate campaigns during the recall, their goal may be to transform the independent expenditures into candidate committees after the fact, requiring revision of campaign-finance disclosures and possible criminal charges.

Another reason for skepticism is the probe's timing as Mr. Walker's 2014 re-election campaign looms. This is the second such investigation against Mr. Walker in three and a half years, following one that began in the office of Milwaukee County Democratic District Attorney John Chisholm in spring 2010.
That probe examined whether staffers used government offices for political purposes while Mr. Walker was Milwaukee County Executive, but after three years turned up nothing on Mr. Walker and embarrassingly little else. The final charges included a case of an aide sending campaign emails on county time, two Walker aides stealing money, and charges of child enticement against the domestic partner of a former staffer.
Mr. Walker's Democratic recall opponent, Milwaukee Mayor Tom Barrett, nonetheless used the probe against the Governor, saying in a debate that "I have a police department that arrests felons, he has a practice of hiring them." So it's notable that the new batch of subpoenas began flying just days before Democrat Mary Burke announced her candidacy for Governor. District Attorneys are partisan elected officials in Wisconsin, and Mr. Landgraf works for Mr. Chisholm. Neither of them returned our call for comment.
The investigation's focus on campaign-finance law also falls into the wheelhouse of the Government Accountability Board, Wisconsin's political speech regulator. The GAB, which is made up of retired judges appointed by the Governor, has a history of pushing aggressive regulations of issue advertising. Mr. O'Keefe's Wisconsin Club for Growth has fought in court with the GAB over regulating political speech.
A person who has seen one of the Wisconsin search warrants tells us that the warrants were executed based on the request of Dean Nickel, who filed an affidavit for probable cause. Mr. Nickel is a former head of the Wisconsin Department of Justice Public Integrity Unit and has worked as an investigator for the GAB. Mr. Nickel told us he is a contractor for the GAB but wouldn't discuss the John Doe probe. GAB Director and General Counsel Kevin Kennedy declined to comment.

Perhaps the probe will turn up some nefarious activity that warrants this subpoena monsoon and home raids. But in the meantime the effect is to limit political speech by intimidating these groups from participating in the 2014 campaign. Stifling allies of Mr. Walker would be an enormous in-kind contribution to Democrats. Even if no charges are filed, the subpoenas will have served as a form of speech suppression.
Mr. O'Keefe told us that the flurry of subpoenas "froze my communications and frightened many allies and vendors of the pro-taxpayer political movement in Wisconsin and across the country." Even if no one is ever convicted of a crime, he says, "the process is the punishment."
Posted by OutFOXedNEWS.com at 9:04 AM