Obama beat Romney by less than 1% in Florida in 2012. And Republicans are determined not to let that happen again.
Last year, Rick Scott made a blatant attempt to target minority voters in a voter purge that targeted 182,000 voters–with an emphasis on those identified as Hispanic, Haitian or members of other minority groups.
The effort–called ‘disgusting’ by one Elections Supervisor–ultimately failed after Scott’s sloppy methods and discriminatory intentions were exposed. But now that the Supreme Court has decided racism is dead and that section 5 of the Voting Rights Act is no longer necessary, Scott has resumed his disgusting and racist voter suppression scheme full force.
Full story at Maddow Blog: http://maddowblog.msnbc.com/_news/2013/08/05/19881209-floridas-scott-readies-second-disgusting-voter-purge?lite 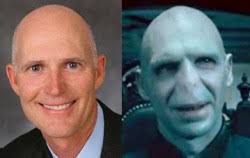 Posted by OutFOXedNEWS.com at 9:04 AM