The conservative mindset is in decline. Stories of cabals and secret plots provide comfort as its power wanes

What just happened in Washington?
Ask a true conservative believer, and they’ll tell you that it was the birth of a terrible beauty. They’ll say the GOP’s true leaders, our nation’s future leadership, revealed itself in all its splendid, futile glory—only to be stabbed in the back by a “thundering herd of chicken-hearted Republicans in Name Only (RINOs)  galloping to the Left.”
If you asked me, I would say that we witnessed a recrudescence of a nihilistic tendency that has never been far from the surface in American politics—a conservatism that is as far from the dictionary definition of conservatism as Obama is from being a socialist. Last fall, on the eve of the election, I wrote in Salon that “America is becoming more multicultural, more gay-friendly and more feminist every day. But as every hunter knows, a wounded or cornered quarry is the most dangerous. Even as the white, patriarchal, Christian hegemony declines, its backlash politics become more vicious.” Was it vicious enough to strap a figurative suicide vest to its chest and threaten the U.S. with default? If you had asked me at the time, I would have said no. Little did I know.
Some of the Republican jihadists who pressed for default feel so personally violated by the presence of a black family in the White House that they would just as soon burn it down as reclaim it. And some live in such a bubble of denial—an alternate cognitive universe in which the poor lord it over the rich and white Christians are a persecuted minority, in which a president who was twice elected by an overwhelming popular majority is a pretender, and a law that Congress attempted to overturn more than 40 times was “never debated”—that they have convinced themselves that a default would have actually been a good thing, that it would have restored the U.S. economy to a sound foundation.
It is a triumph not so much of a conspiracy as of conspiracist thinking. As John Judis wrote in The New Republic last week, even “lobbyists I talked to cited….Richard Hofstadter’s essay on ‘The Paranoid Style in American Politics’ to explain the rise of the populist right. It’s the kind of reference you’d expect to read in a New Republic article, but not necessarily in a conversation with a business lobbyist.” 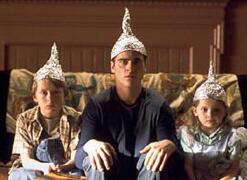 Posted by OutFOXedNEWS.com at 7:26 AM