Sen. Ted Cruz Born Out of Wedlock? – His Claim to American Citizenship

Sen. Ted Cruz Born Out of Wedlock? – His Claim to American Citizenship Depends Solely on His Parent’s Marriage Certificate – Originating in Texas and or Canada? 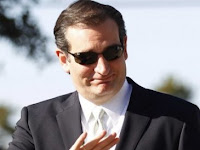 Continuing along on Ted Cruz with the help of the Dallas Morning News’s exclusive publishing of Ted’s thirty day old official Canadian Birth Certificate to confuse the issue of Cruz’s American Citizenship rather than clarify it.
One has to wonder when both his parents Eleanor Darragh Wilson and Rafael Bienvenido Cruz divorced their spouses of previous marriages.
Eleanor Darragh Wilson has two daughters from her previous marriage who used to come visit mommy and live with mommy and step daddy Rafael in summer, meaning that Eleanor D. Wilson’s  ex-husband had primary custody of the children during the school year or were living with grandparents.

Have to wonder how close Ted is to his four half-sisters?
The divorces of Ted’s Parents must have happened sometime between 1962 and 1965 as the online Texas marriage records site (1966-2008) does not show a marriage after 1966 in Texas for these two people and under their commonly used names. Did they marry in Las Vegas? Lol
The requirements for citizenship for Ted at the time of his birth, from a birther site btw, are:

2. the mother was physically present in the United States or one of its outlying possessions for a continuous period of one year prior to the personʼs birth.


Which leaves us with the question – Was Ted’s Mom married to Rafael Cruz on December 22, 1970?
How long was Eleanor Darragh Wilson in Canada prior to Ted’s birth?

Was the reason for a quick trip to Calgary the means to get what looks like a legitimate birth certificate.


Anglos and Hispanics have entirely different points of view on legitimacy. Being born out of wedlock is more an English common law term that recognizes DNA connection but probably denies a claim on the father’s estates and titles etc.


That in many Hispanic cultures, if your father puts his name on your birth certificate, you have a father (period.).


Words like bastard, interchangeable by some with out of wedlock, are used with varying degrees of importance depending on which local culture in which the words are used or uttered.


The Canadian Birth Certificate implies that the parents are married.


But to be quite honest. Looking up marriage requirements in Alberta, there are no paper trails required for a first time marriage, no divorce decrees etc. required.


That in a hypothetical situation, an eager couple, resident worker aliens that want their child to appear legitimate at birth can say they are married and don’t have a copy of their American Marriage Certificate or they march into Calgary city hall, declare themselves single, Passports don’t mention marital status btw, and marry in Canada while waiting for one or two divorces to finalize in the States. LOL


Can’t get more libertine and or libertarian than that or let any government U.S. Canadian etc. interfere in private matters like marriage, birth or legitimacy.


And considering the elder Cruz and his trail of tall tall tales beginning in Cuba, anything is possible.


In any case, Ted not only has to show his Canadian Birth Certificate but also his parents legitimate Marriage Certificate if he wants to be President.


Otherwise all these points are moot.